What makes a place? As important as the architecture and spatial planning are the people and history. While cutting-edge technologies like Virtual Reality (VR) and Augmented Reality (AR) are helping us to see imaginary beings and things, can they help us see the past of a place? The 3-year creative tourism project Design District Hong Kong (#ddHK), presented by the Tourism Commission and organised by Hong Kong Design Centre with Hong Kong Comics & Animation Federation as Strategic Partner, commissions the public art project BeHere to a world-leading Japanese new media artist and is produced by Osage Art Foundation.

Mr Fujihata is one of the visionary pioneers of new media art. Working with video, animation and digital imaging since the ‘80s, he is most recognised for his sophisticated interactive network installations, such as Removable Reality (1992), Beyond Pages (1995-1997), Impressing Velocity (1994), etc. For BeHere, he adopted the technologies of AR, photogrammetry and smartphone app to recreate the historical scenes of everyday life in Hong Kong. From the Blue House to Dominion Garden, 3D figures and virtual scenes will be augmented in 10 locations in Wan Chai for the audience to explore the ordinary life of yesterday. As the #ddHK initiative is gathering momentum for its launch in December, we had the pleasure to chat with Mr Fujihata about the creative process of the project.

Could you tell us more about the concept behind BeHere?
As a new media art project that aims to engage the public, BeHere has two aspects. The first is to examine the connection between people and place, as well as the past and the present through new media. The second is to explore new possibilities of AR with 3D modelling. With reference to snapshots and images of the daily life in Hong Kong from the 40s to 70s, our actors have acted out the perceived scenes. It’s shot by photogrammetry with 70 cameras in 360 degrees and the virtual 3D figures are augmented into the real world. Viewers can frame their own scenes between the two realities and place themselves in the pictures.

VR and AR are both emerging technologies. Why did you choose to use the latter for this work?
The technology of AR adds information onto the real world. It augments our understanding of the world. People get more conscious about the difference between here and there, past and present, inside the screen (virtual) and outside the screen (physical reality). This is a big difference between AR and VR.

How would you like the audience to engage in the experience?
They can manipulate the AR data simply by moving their own pocket devices and enjoy the fun of seeing images that mix together the past and present, the virtual and real. It’s a platform that encourages them to explore personal experiences, retrieve memories of the past and reimagine and create new memories for the future. They can freely interact with the 3D AR figures, recompose the scene with their own imagination and include their family and friends into the frame. There are no set rules. As it’ll be placed in public spaces, the reactions of participants will be difficult to predict. But the interactions will be recorded so that we can understand how people of different generations interpret history.

You and your team have looked into old Hong Kong images extensively and interviewed some Wan Chai residents. Could you share some interesting discoveries with us?
The daily activities of the past recollected and described by the elderly residents in the district are something which I could not have grasped or captured just from photos. I find these ‘disappeared’ street activities very interesting. I tried to choose photographs that can represent common daily life. But as cameras were expensive equipment in the past, those pictures were probably shot by the more affluent or by professionals. Perhaps even they themselves didn’t know the stories behind their shots. The micro-narratives of the interviewees were used as the building blocks of the meta-monument which symbolises an entire community. As the core person who delved deeply into the old photographs, I hope to share this experience with others by way of AR technology.

What are the most challenging parts of the project? How did you and your team overcome it?
The challenges were mainly from two technical issues. The photogrammetry algorithm was invented for map-making with the use of aerial photos. Although it has now become popular in gaming and cinema, it’s still rarely used in capturing human figures in action. Secondly, despite the growing popularity of AR, its development is still at an early stage. Using a technology this new for a public event is pioneering. We are being extra precautionary under this volatile condition.

But luckily, we received a lot of support. A project like this would not be possible without them. During the research stage, Gillian Choa, Roger Garcia, Frog King and Stanley Wong shared with me their stories. St James’ Settlement arranged interviews with the local elderly. My heartfelt thanks to them, as well as to all the archive photos copyright holders for letting us use their inspirational images. During the production process, we needed venue and equipment support which included 70 cameras, props and costumes. We are grateful for the support from the School of Creative Media of the City University of Hong Kong, the School of Theatre and Entertainment Arts of Hong Kong Academy for Performing Arts, Hong Kong Baptist University and Tokyo University of the Arts. 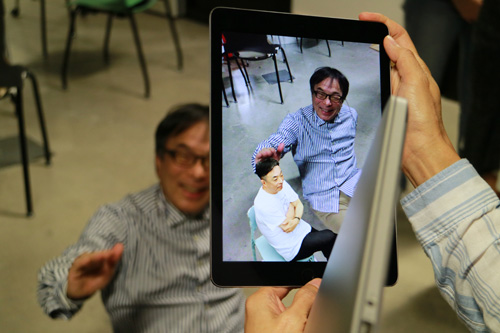 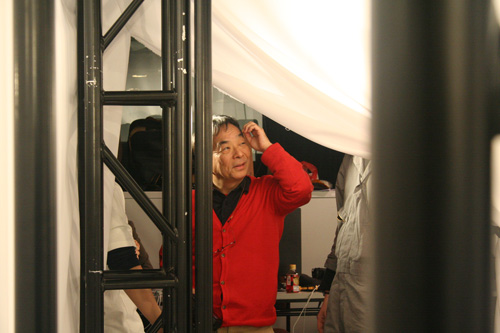